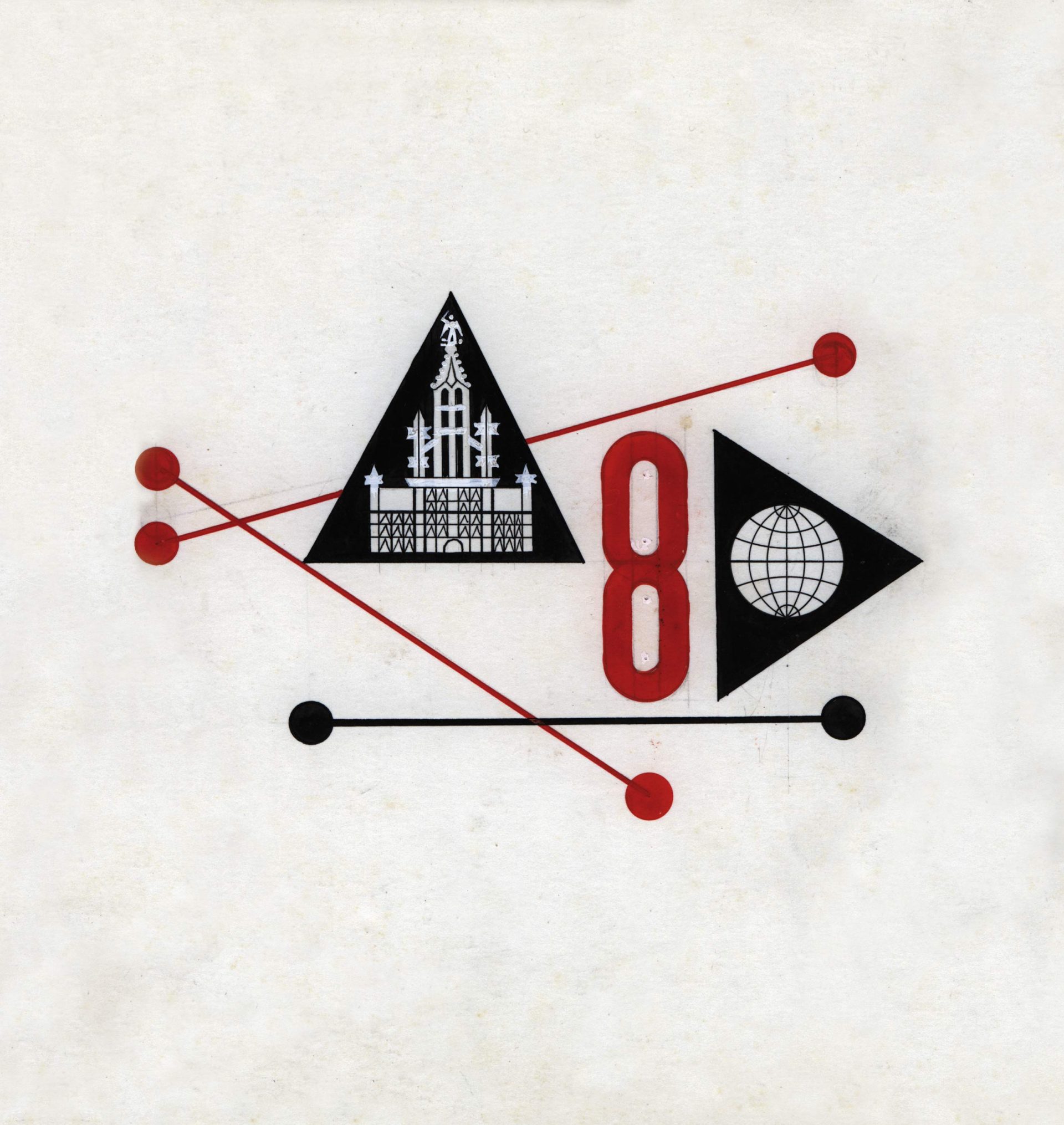 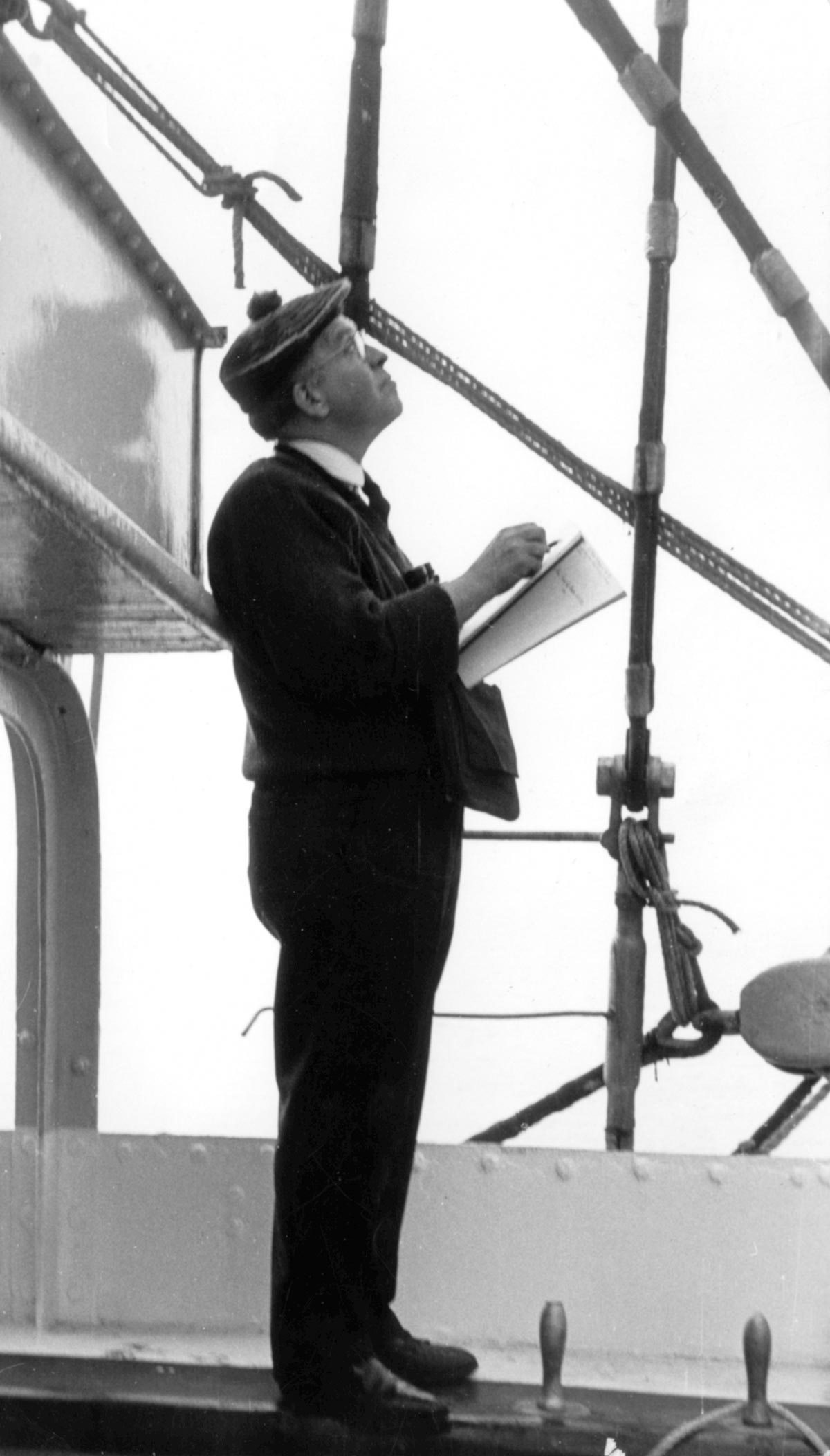 Lucien De Roeck, or an entire life dedicated to typography, drawing and education. He enrolled at the “Instituut Ter Kameren” in 1932, at the tender age of 17, at the time better known as the “Institut Supérieur des Arts Décoratifs (ISAD)”. The new student, who soon proved to be a passionate worker and inspired graphic artist, quickly learned all the basics of typography, layout, poster and brand logos. Henry Van de Velde’s appeal, as well as that of his typography teacher Joris Minne, undoubtedly instilled the discipline he has imposed on himself throughout his entire life. His career had already taken off whilst still sat on the school benches, with his poster designs for the Ostend-Dover packet boats and the city of Antwerp serving as a lasting memory of this time. It was quite obvious that he would be taking charge of the ISAD’s typographic studio ten years later. His talent and his very personal pedagogical feeling were the perfect recipe for shaping up the young graphic designers for a period lasting almost forty years.

He also taught at the Sint-Lucaspaviljoen in Antwerp, as well as the “Haute Ecole Provinciale” in St.-Ghislain. The press really found what had been taken from it more than ever before in 1945: its freedom. Newspapers appeared or reappeared. He worked on the design of various new publications, sometimes throughout the entire night and sometimes even still at the layout table. He designed the models for the Centre of Fine Arts newspaper, for “La Lanterne”, “La Cité”, “Phare” and “Le Quotidien”. He was commissioned by “Pan” to organise the illustration for the drama section. He worked non-stop for thirty years; in the theatre in the evenings and then back at his work table until the early hours. The press waits for no one, they start to roll at dawn.
Share 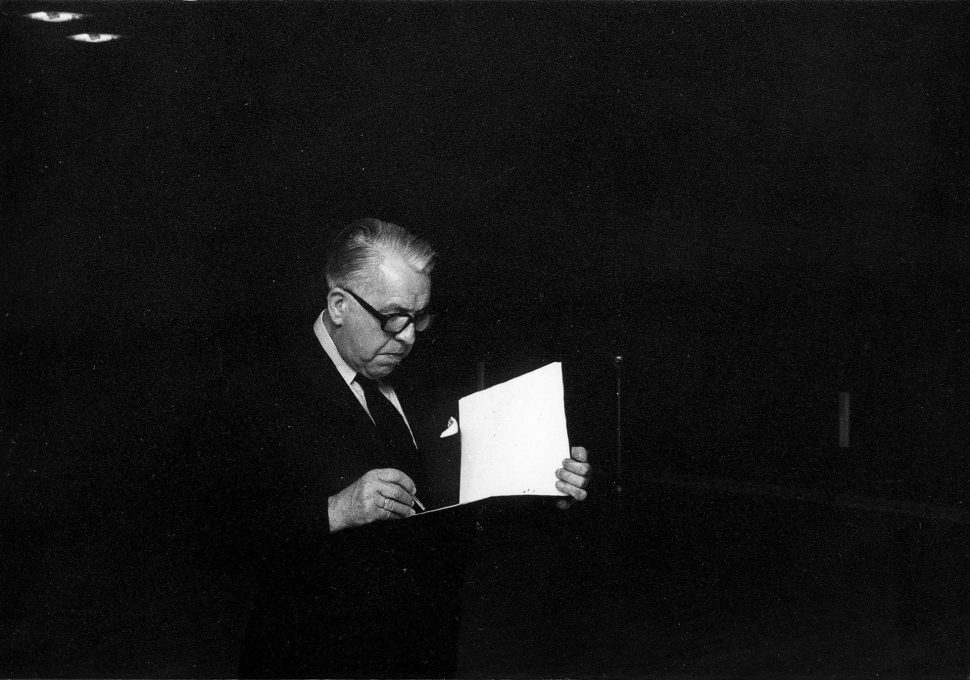 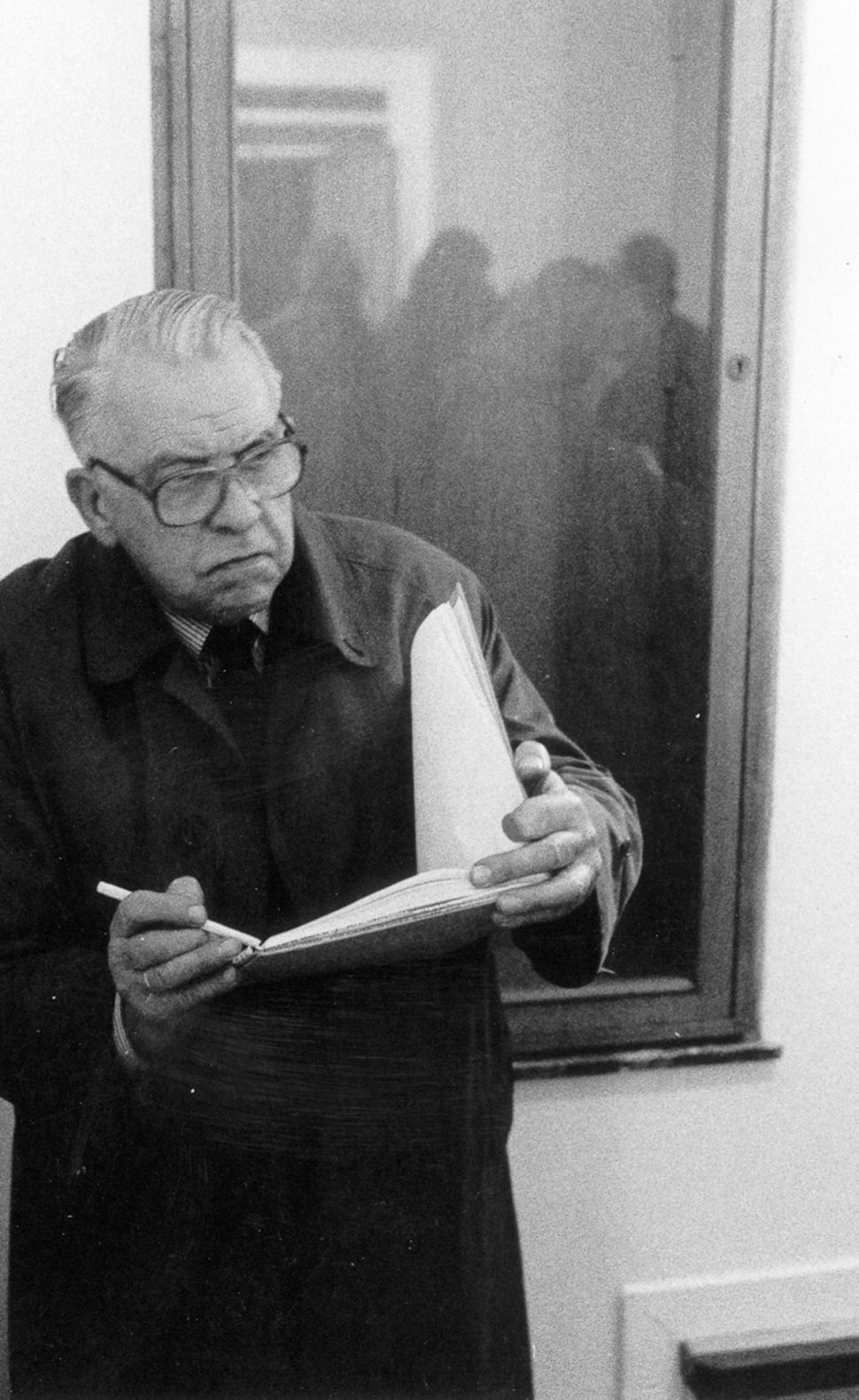 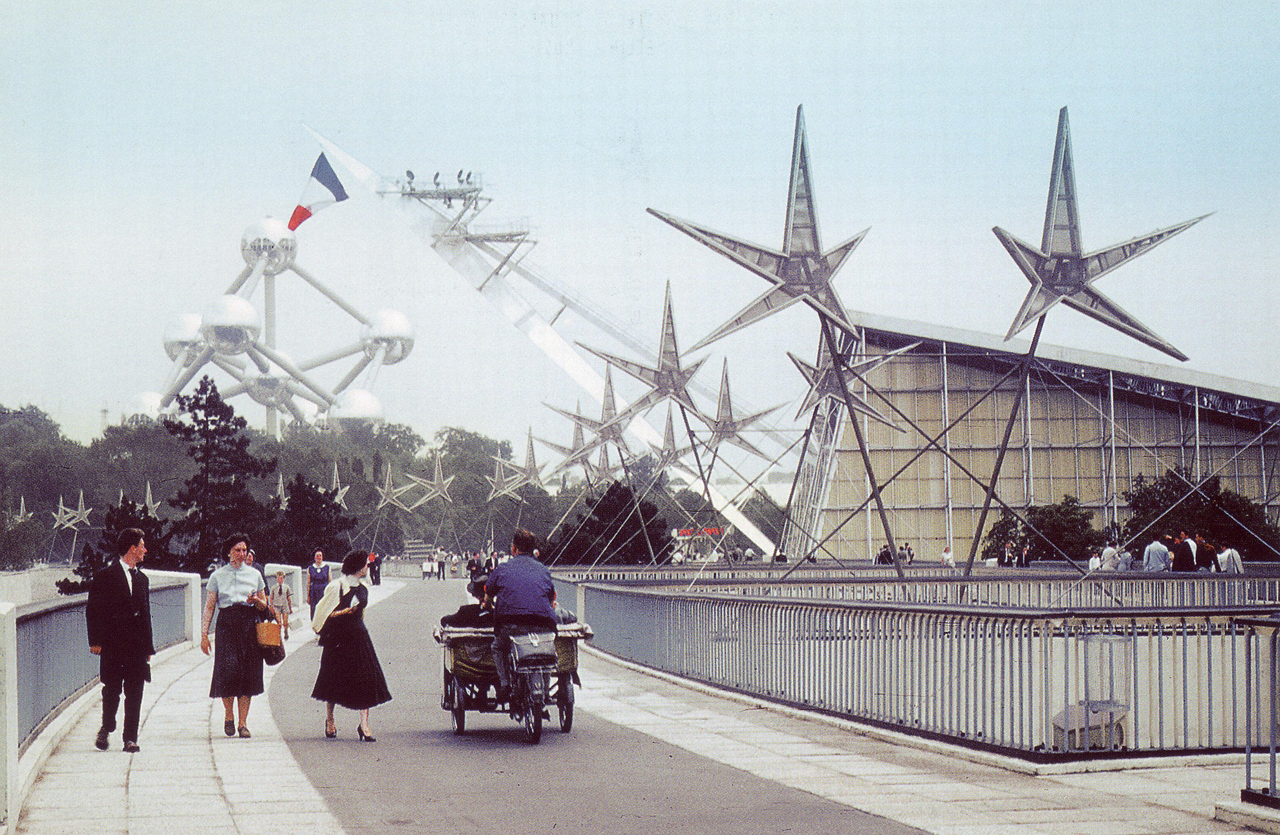 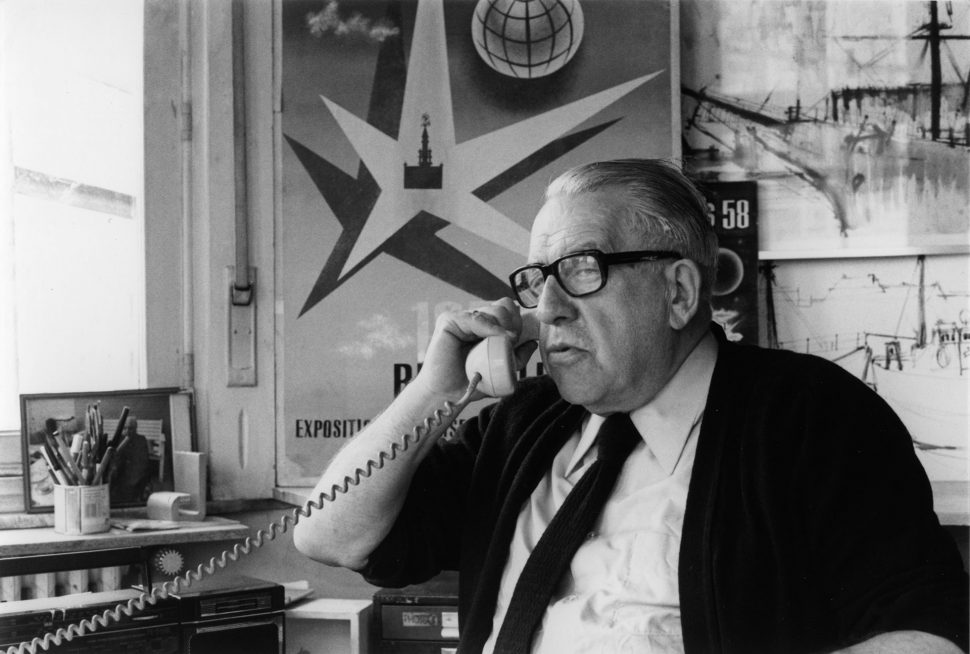 He became the laureate in the design competition for the World Exhibition in Brussels’ logo and poster in 1954: the Expo 58, a modern name which perfectly befitted the spirit of the time. The Expo star became a starry sky as a result of its impressive presence. His elegant, asymmetrical and stretched star is still highly desired by collectors. Lucien De Roeck, with his inquisitive look and always holding his pencil and sketch book. The sketches are a little bit like a diary, which he keeps up to date almost every single day. The shelves in his library have almost collapsed under the weight of his many sketch books. Flicking through these will allow you a very close look into De Roeck’s life: his travels, the free moments, the ports, his friends, the strangers he met along the way and everything else … The Schelde, “his” river, certainly deserves a mention too. There is always a maritime atmosphere in Dendermonde (where he was born). The great river always fascinated him, he used to walk along its banks to the estuary, he meandered along the docks of Antwerp’s port, which he was so in love with, he produced sketches of the contours of a thousand ships, ranging from a little nutshell to the most majestic packet boats. He enjoyed sitting down to draw here both before and after lessons, both during the summer and winter months, right in the midst of the cranes and loading ramps. He truly loved ships, but always stayed ashore. They were a permanent source of inspiration to him, just like Antwerp always remained his favourite port. 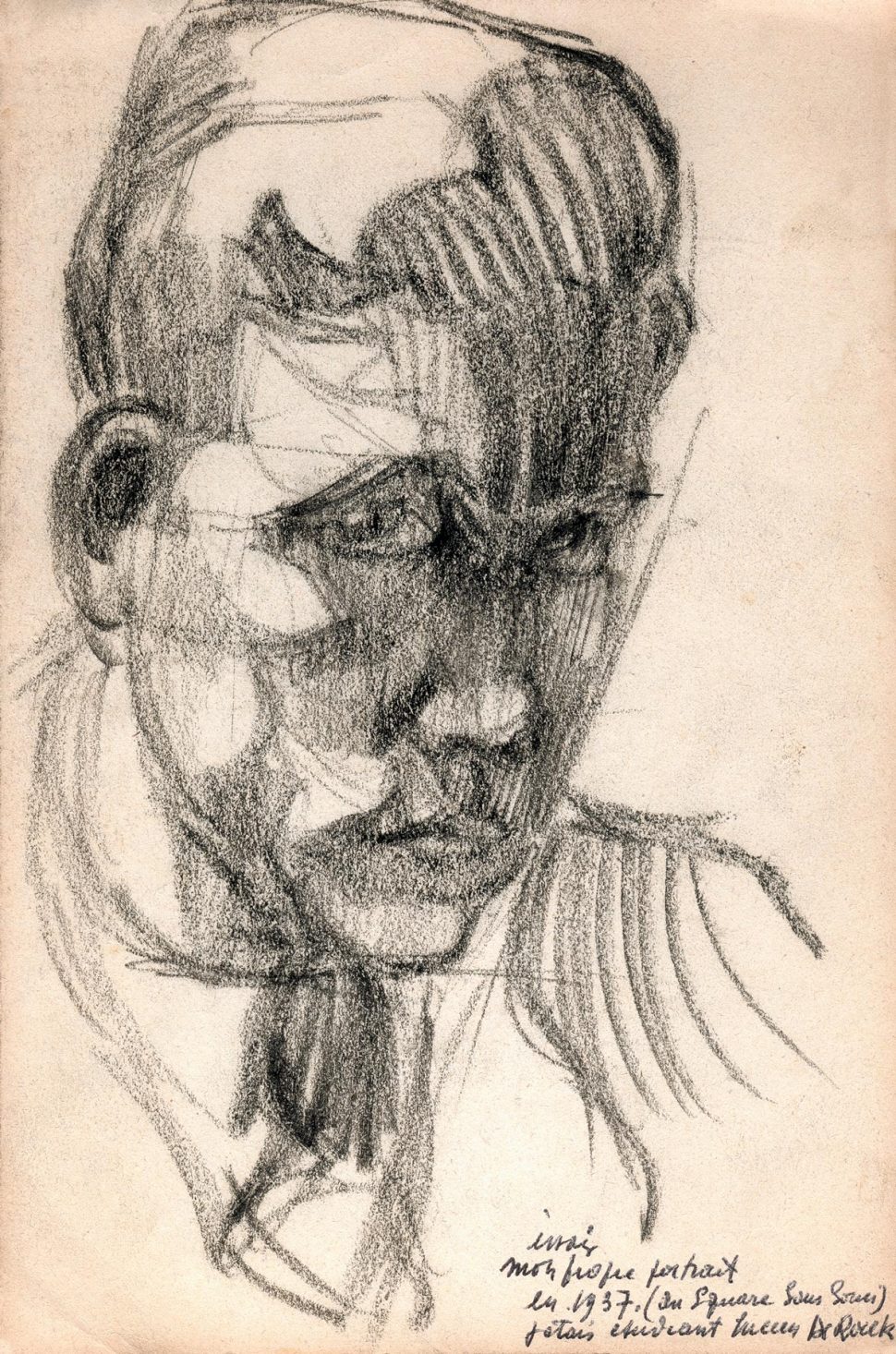